To tank or not to tank? That is the question. It’s a very common strategy amongst ”savvy” dynasty players. However, I think it’s used WAY too often. I see it constantly. Don’t get me wrong, it can be a sound strategy at times, but far too often teams look to tank mid-season before their team is ready to take off.

I’ve been playing fantasy football for 17 years. The first 11 years of that being your traditional redraft league. Tanking wasn’t an option, because you just start over the next year. I have seen nearly as many championships won by teams who finished 8-5, 7-6 and even 6-7 as I have teams who only lost 1-3 games. In fantasy football, it’s not how well you did the entire season...it’s how well you did weeks 14-16. That’s the simple truth. In many instances, once you make the playoffs, it’s a clean slate. My 7-6 team doesn’t care if you went 11-2. You all of a sudden have a bunch of injuries, and my team is just starting to cook. Yet, all of those dynasty players who are deciding to firesale their assets for rookie picks by week 8 are missing out on championships. It’s the truth. They think they are getting a valuable rookie asset some late April, but that’s not guaranteed. I have more stories of this strategy not working out than actually working.

I’ll tell some of those as the off-season goes on. Here is one example of this that goes to my point. @Fantasy__Champs was one of the teams in the Joes vs Pros Dynasty Startup I helped organize last March. He’s a savvy player who made a lot of good “trade back” moves during the draft. It’s something I talk about in my dynasty guide. But the point of this story is his entire strategy was to go very young and “tank” so that he would again have an early rookie pick in the 2021 draft.....then he won the league 😂

What’s up guys it is Fantasy Champs. This year was truly a wild year in fantasy football and by far the craziest season I have ever witnessed. In this crazy year I ended up pulling off a miracle in the Joes vs Pros Dynasty League, hosted by Fantasy Guides. Let’s get into how I did it.

For those of you that don’t know, a dynasty fantasy football league is a format where you keep all of your players year over year. There is no redraft, just a yearly draft with rookies to restock your teams. It is somewhat similar to being an NFL GM I guess.

In this league I went with a contrarian approach to the startup draft. My goal was to build for the future. I wanted to trade back as much as I could to acquire future rookie picks and young, high upside players. Now don’t get me wrong this approach is extremely risky, however if you hit on your young guys you could find yourself with a true dynasty on your hands.

The first move I made was trading my back out of my first round pick. In this trade I gave up my 1.09 startup pick and my 8th round pick to receive the rookie 1.02, a 2021 rookie 2nd, and a 4th round pick in the startup. This trade was honestly the trade that won me the league and that is why I am going so in depth about it. I ended up getting Calvin Ridley, Jonathan Taylor, and I still have the rookie 2nd this year. These two guys were the key pieces to my playoff upsets.

All in all, the startup draft went well for me. At the time my decision making was being sort of questioned by a few league mates and I completely understand why. I didn’t make a pick until I drafted Calvin Ridley in the 4th round! I just kept trading back and stocking up on future assets. Following the startup my core pieces consisted of Calvin Ridley, TJ Hockenson, Michael Gallup, and Kerryon Johnson. Yeah, it was pretty ugly but the rookie draft is where I made my money.

The 2020 rookie class had the potential to be an all time class and I was in love with these prospects. One of the main reasons I took this approach was because I saw so much potential in this loaded class. Going into the draft I had the rookie 1.02, 1.03, 1.04, 2.02, 2.07, 2.09, 3.11, 4.02, 4.09. I was feeling pretty good going into this draft and it turned out even better than I had expected. I took Jonathan Taylor, JK Dobbins, and Ceedee Lamb in the first, Tee Higgins, AJ Dillon, and Bryan Edwards in the 2nd. Then in the later rounds I snagged Van Jefferson, Jalen Hurts, and Quintez Cephus. What a draft it was.

With a team led by rookies I was not expecting much. In fact I was hoping to just tank this season, get a top rookie pick in next year's rookie draft where I had attained 3 firsts and 2 seconds. But this is where things got weird.

I ended up starting 4-2 with my struggle squad. It made no sense and at the time I was looking at the other top teams and I knew I had no shot at beating those god squads in the playoffs. So I made a risky move. I traded JK Dobbins and a 2021 first for Saquon Barkley. This was after Barkley’s ACL tear so the risk involved with this was huge. But the way I saw it was I ended up losing a ton of games down the stretch, get that top pick and come back strong next season with JT and Barkley.

Well things got even crazier because I snuck into the playoffs as the 6th seed. This is at the exact time my team was falling into place. To put it in perspective, during the regular season my team averaged 102 PPG. In the three weeks of the playoffs my team averaged 145 PPG. This was in large part due to JT’s breakout, Calvin Ridley playing like an all pro, and Jalen Hurts blowing up at the perfect time.

During the playoffs the combined regular season record of the 3 teams I beat was 31-8. I honestly have no idea how I pulled it off, but I think that I have just built myself a dynasty. Heading into the offseason I see myself having 2 top five Dynasty RB’s, a young WR core that consists of Ridley, Lamb, and Higgins, Jalen Hurts and Ryan Tannehill and multiple picks in this amazing rookie class.

I am not here to brag about how I built an amazing roster, I just want to show you that there are so many ways to approach your dynasty leagues. Fantasy Football is so wild that the most insane things can happen during any given week or season. Just take it one week, season, and move at a time. If I can win a championship with this lineup, I’m pretty sure anything is possible hahaha. 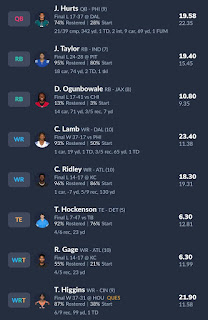